It goes without saying that photo-montages aren’t actual photos. However, there are different ways of creating virtual reality, and if you are careful in your selection of camera lens, and light and cloud conditions, you can almost make 62 x 145m-high wind turbines disappear altogether!

An example is given here.

The top two images are the developers’ comparison; that at the bottom is from the same viewpoint. Does anything strike you? 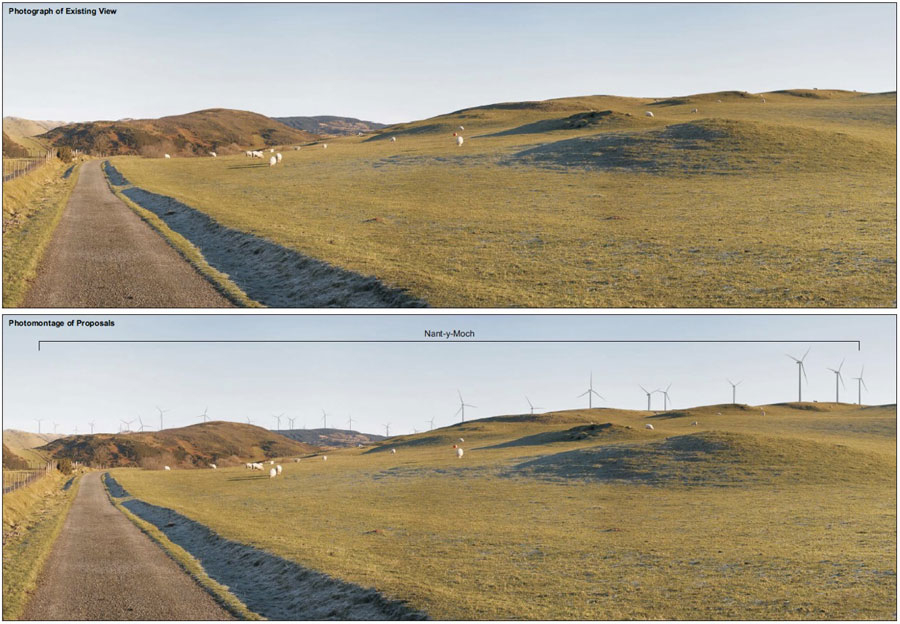 As with the other montages on the SSE website, their photograph is quite deliberately of extremely poor quality and was taken against a very light background. The inserted turbines catch the sunlight from one side. In practice this means the pictures do not show the turbines at all, just the shade on the turbines, giving the false impression that the projected turbines would look spindly and insignificant.

For the comparison image at the bottom, and in order to get an idea of the true impact of the proposed turbines, a picture was taken from the same spot, using a cheap old 7.2 megapixel camera with standard lens (5.8mm). The turbines were inserted in the correct places and at the right height (worked out using a Google Earth image).

Great care was taken to try as nearly as possible to insert turbines of correct size in exactly the right locations, and though we do not have the sophisticated software available to SSE, we believe that our image gives a more realistic impression of the true impact the project would have on the landscape.

Comparison of the two versions also reveals that SSE’s image was not taken with a standard lens, but with a wider angle lens. This is another well-known way of minimising the apparent impact of turbines on a landscape photograph. The developers are using such photographs as supporting evidence for their application. Are such techniques legitimate? Do the consultees realise that they are being cheated? Are there rules? Have the developers flouted or bent them? Does use of these images invalidate the application? And if photographic information is presented in such a distorted fashion, what can we expect of their other supporting evidence?