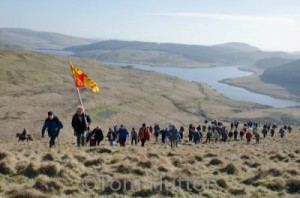 Around 250 people came, and most climbed to the top of Bryniau Rhyddion, and sat on the dry grass and sunbathed, while enjoying the view over Nant y Moch reservoir, and listening to a speech by outdoor writer Jim Perrin.  FreeRein brought two ponies and Jim rode one of them to the top (he is not very well) where his sensitive speech rallied everyone.

Journalists Patrick O’Brien and James Nicholas from the local paper The Cambrian News attended the rally, and it received good coverage in the following week’s edition.

The society’s press release after the rally formed the basis for wide media attention: 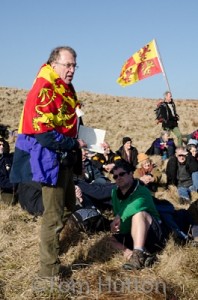 Jim Perrin, writer and climber, led over 250 people on a walk up into the Pumlumon mountain range, in Mid Wales, to protest about the possible desecration of this magnificent mountainous upland by a proposed wind power station. The stunning views across the Nant y Moch reservoir, enhanced on the day by beautiful sunshine, emphasised only too clearly the what would be lost should the development go ahead, covering the rolling hillsides with 64 giant turbines, each well over 400ft tall. The area, the most tranquil spot in Wales, and classified by the Countryside Council for Wales as a landscape of outstanding quality, is also steeped in history as the place where Owain Glyndŵr won the first battle of his great uprising.

The Cambrian Mountains Society is campaigning for the area to be designated as an AONB, a title it clearly warrants, that would be impossible if it were to be covered in industrial giants.

The march was attended by people from all across Wales and well as the Midlands, the South West and greater Manchester, who then followed Perrin as he rode, in true Glyndŵr fashion, to the top of one of the hills targeted by the development. Here he addressed a seated crowd.

These links show some of the media coverage:

The brilliant weather made the event a photographer’s dream, and many more images can be viewed on the Society’s Facebook page.