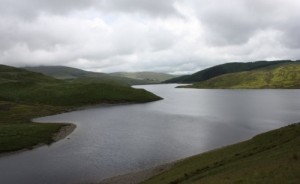 On 20th June, nearly a hundred members and other concerned people – including Ceredigion MP Mark Williams – turned out in unpleasant conditions to show their opposition to Airtricity’s Nant y Moch proposals. The gathering took place on the shores of Nant y Moch reservoir, amidst the hills on which the developers plan to site around a hundred huge wind turbines.

The landscape around Nant y Moch is ranked by the Countryside Council for Wales as being of national importance. 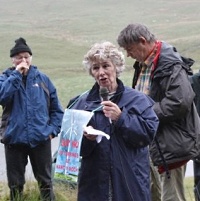 Ann West said “This area, Pumlumon, was recognised over 70 years ago as an area warranting special protection as a National Park. Thirty years ago, an attempt at National Park designation was scuppered by political skullduggery. Little has changed since that attempt; the hills are as wild and beautiful now as they were then and the Cambrian Mountains Society believes that they must be protected from the threat of 400 feet high turbines which save little, if any, CO2 and do not provide a secure supply of energy.

“Littering the landscape with monsters which survive only because of enormous subsidies will do nothing to help the people who live here, and will destroy the expanding tourism industry which brings income into the uplands. Everyone here today is determined to make sure that our elected representatives are aware of the true facts about windpower in the hope that they will not act on misleading claims by the industry, who freely admit that there would be no turbines without the outrageous subsidy.” 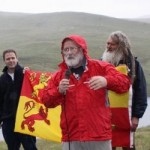 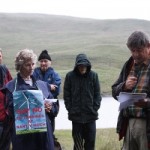 A message of support, from Nick Bourne, leader of the opposition in the National Assembly of Wales, was received and read out. 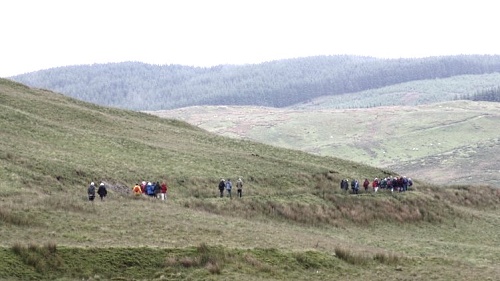 Despite the rain and mist, many protesters later took part in a walk above the shores of the reservoir, below some of the summits and ridges which are threatened with huge turbines, and all their ancillary excavations for roads, cables and foundations.