People and the Landscape 7

The foundations of the earliest-known buildings within the Cambrian Mountains are Roman, and have been excavated within the fort at Pumsaint. For the thousand years thereafter, little is known of settlements in the area, let alone buildings, probably due to the very hostile soil conditions and still limited archaeological methods. 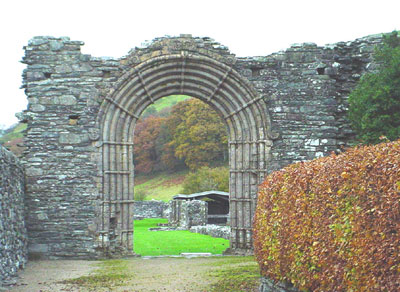 Strata Florida Abbey is the best-known mediaeval building, and has inspired poetry in both national languages since its foundation by the Cistercian order in the mid-twelfth century. The Abbey’s great west doorway invariably attracts attention, as does the collection of original mediaeval tiles in the chapels of the south transept.

House platforms believed to date from mediaeval times are commonplace throughout the area. Because there is some documentation, the best-known settlements occupied Monastic grange lands. They probably date from the later twelfth century, and it is likely that a number of the house platforms surviving in the Cambrian Mountains relate to the early granaries and subsequent sheep farms administered from Strata Florida and possibly Abbey Cwmhir before the Dissolution of the monasteries in the mid-sixteenth century.

Evidence from the surviving buildings on either side of the main east-west watershed suggests slightly differing mediaeval and later building traditions. On the western side, stone and mud were the main materials for buildings roofed with a minimum of timber. Conversely, the eastern side had a relatively timber-rich construction industry, notable for its skilled employment of hardwoods in elaborate house-frames as well as extremely durable roof structures. Many have survived, particularly in or on the edge of the uplands, owing to economic regression, and the need to ‘make-do-and-mend’ rather than improve or demolish/rebuild.

A recent study of Radnorshire houses shows how peasant hall-houses probably developed into animal-sharing timber-framed long-houses during the sixteenth century, how some grew into minor gentry houses thereafter, and the relationships between socio-economic functions of dwellings on lower ground with ‘summer houses’ on the upland pastures. A particularly good example is Nannerth-Ganol and its historically-related holdings in Cwmddeudwr.

There are relatively few eighteenth-century houses within the area, but the sites of Cwm Elan, Dderw, Dolaucothi, Hafod, Llwyn Madoc, Nantgwyllt, Neuadd Fawr (Cilycwm) and Rhydoldog deserve mention. Although five are now derelict or demolished, three (Dderw, Dolaucothi and Hafod) are registered as gardens or historic landscapes on the Cadw/ICOMOS Register*.

The important Wilderness Picturesque landscape movement grew in the Cambrian Mountains after 1783, from the vision of Thomas Johnes at Hafod. This landscape philosophy is probably best seen as a major antecedent to the wilderness vision underlying John Muir’s imperative to establish American National Parks. 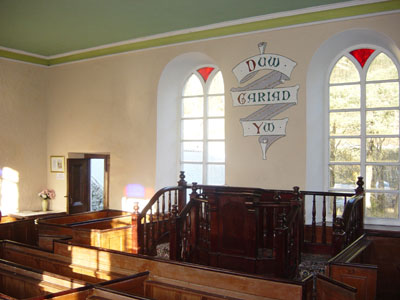 Lying largely outside major settlement nuclei, the Cambrian Mountains encompass only a handful of parish churches. The earliest of these is most spectacularly mediaeval, at Cilycwm. Those at Abergwesyn, Ysbyty Ystwyth, Caeo, and Ysbyty Cynfyn are all either nineteenth century re-modellings, or Victorian erections on new sites. Eglwys Newydd is notable for its Hafod associations, and for Chantrey’s poignant monument to Mariamne Johnes. Neglect has already effected considerable damage to the graveyards at Abergwesyn and Ysbyty Cynfyn, where the most spectacular pebble graves which survived complete until about 1980 are now rapidly disintegrating through plant growth and tree root invasion.

There is also a sprinkling of chapels here, some only just surviving in quite remote areas; Soar y Mynydd is remotest and best-known; it has become a place of pilgrimage for its Sunday afternoon services in the summer season. Founded by Ebenezer Richard, father of the “Apostle of Peace”, this homely chapel was built to serve the scattered pastoral community that has farmed in these mountains for generations. Capel Ystrad Ffin, near Llyn Brianne, once belonged to Strata Florida abbey. A neglected chapel-of-ease at the county border, it made a convenient meeting place for the early Welsh Methodists.

Most surviving chapels are under threat of total abandonment as attendances drop, and there are particular problems about adaptation for re-use, since residential conversion may be disallowed, either by covenants or by the feelings of their communities. 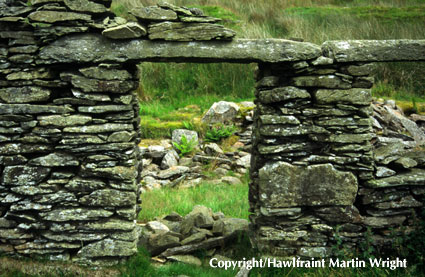 Finally, the architectural value of the vernacular and industrial houses and farm buildings of the Cambrian Mountains should not be underestimated. Sadly, many of mid-Wales’s protagonists (in both local and national government) have, over the last century, seen the Welsh peasant and farmers’ built vernacular past as something to be swept away in the name of ‘progress’.

The future survival of the varied and important historic built environment of the Cambrian Mountains is largely dependent on the survival of their communities, and of the skills they possess to maintain these buildings and their settings.