People and the Landscape 6 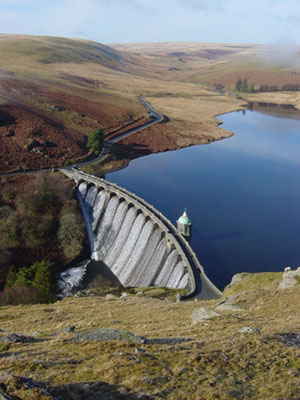 Nature’s scattering of small lakes was augmented in the 18th and 19th centuries by ponds built to store water used by miners in hushing and ore-dressing, and later to power machinery via a system of dams, leats and waterwheels.

The coincidence in the Elan valley of dramatically glaciated valleys, high rainfall, and low population resulted in Birmingham’s remarkable Elan Valley reservoir scheme, started in the 1890s. Construction of the dams and waterworks had a huge local impact, with the building of a village for workers, railways, and new roads, as well as the flooding of older settlements; further changes followed during the construction of the Claerwen dam in the 1950s. The presence of the reservoirs has greatly influenced land use within the Elan catchment. 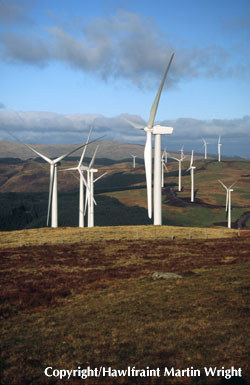 Llyn Brianne was completed on the headwaters of the River Tywi in 1972. Described as a regulatory reservoir, its purpose is to supplement flows in the Tywi during dry periods, as compensation for water supplies abstracted some 40 miles downstream at Nantgaredig, near Carmarthen, and destined for West Glamorgan.

Nant-y-moch and Dinas reservoirs were built in the late 1950s as part of the Rheidol hydro-electric scheme, which can generate 55MW from its four generators. More recently, six hydro-electric generators were installed in the Elan Valley dams, with a total capacity of 4.8MW, yet minimal landscape impact, since the turbines are hidden in the dams, and the cables laid underground.

In contrast, the Rheidol (2.4MW installed capacity) and Cefn Croes (58.5MW) wind power stations, and their associated power lines, are sited to maximise power output, and with little consideration for their landscape and environmental impacts: Cefn Croes power station stands astride a high plateau in the very heart of the Cambrian Mountains.

The last hundred years in particular have shown that the needs of towns and cities far distant from the Cambrian Mountains can have a major impact on this remote landscape, and all the developments noted above have eroded the area’s natural beauty, in return for a better quality of life elsewhere. Ultimately such demands could destroy the special qualities of the Cambrian Mountains.