People and the Landscape 5 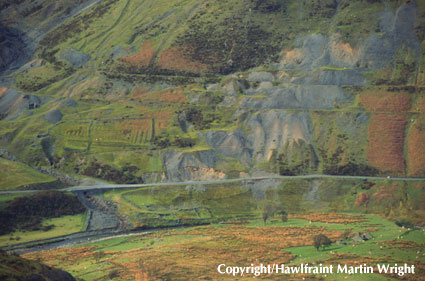 With the exception of the museums at Llywernog (lead) and Dolaucothi (gold), the abandoned and often isolated metal mines of upland central Wales have been allowed to decay naturally, and are generally little more intrusive features in the landscape than are the ruins of lluestau. Like them they afford communion with a way of life that survived to living memory yet now seems much more remote. In particular, the many reservoirs and watercourses built to serve the mines are major achievements of Victorian, and in one case Roman, engineering, and add both human interest and biodiversity along their routes.

Mining was widespread but sparsely distributed. With few exceptions the mines worked lead and zinc deposits of quite high grade in narrow lodes underground. Surface remains are thus seldom extensive. Pumping and crushing were water powered. Ore concentrates were exported via pack trail or rural roads. No smelting was done on-site. Tips are thus small in comparison with those of the slate industry and essentially of the local rock; there are no slag heaps and no unsightly scars of opencast quarries. Loss of woodland in the region was largely due to agricultural pressure, not mining.

The lead mines of Cwmystwyth are exceptional in the Cambrian Mountains for their enormous scale, accessibility, and age – the workings on Copa Hill are amongst the oldest in Europe.

With conservation and protection, the mines are an asset to a landscape, on which their impact has been surprisingly small, though there is much potential for education about, and interpretation of, the mining legacy.

More information about the mines can be found in publications available locally, and from the Welsh Mines Society, which also organises field trips. The Spirit of the Miners project focuses on the history and legacy of the north Ceredigion mines, and its website contains a wealth of information and images.