People and the Landscape 1 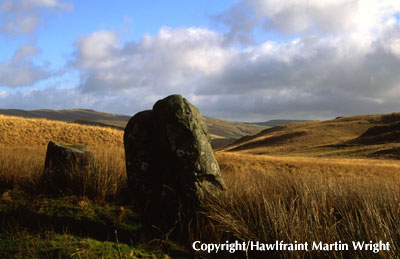 Broadleaved woodland became established over all except the higher peaks of the Cambrian Mountains following the end of the last glaciation about 12,000 years ago. Today’s predominantly grassy heathland was created by woodland clearance from the earlier prehistoric period onwards, combined with climatic change which at high altitude gave rise to blanket peat formation.

The large numbers of cairns, individual megaliths, stone rows and stone circles may well be associated with the early exploitation of upland pastures during the Bronze Age, 5500-3500 years ago. The fact that many are sited high on horizons indicates that they were meant to be seen from long distances, possibly for territorial marking, for commemoration of special individuals or for use as foresights for astronomical alignments.

Peat bogs are a most important archive documenting human activity in the Cambrian Mountains. Despite their archaeological importance, they are an undervalued and diminishing resource, with many hectares having been lost only recently, during construction of Cefn Croes wind power station.

The archaeology of the Cambrian Mountains is relatively well preserved for the very reasons that make the area special – its remoteness and lack of human disturbance. There are many aspects which are not yet fully understood, and it is important that the archaeological record is preserved in its landscape context for future research.