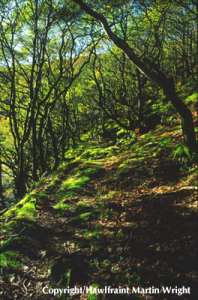 The Cambrian Mountains include a wide range of habitats from the bogs, heather moors and lakes of the upland plateaux down to the native woodlands of the valleys and the tumbling streams and rivers below. A large proportion of the blanket bog in Wales is found here as well as very significant areas of upland and lowland wet and dry heathland and some fine examples of the classic atlantic oak woodlands clinging to the hillsides. Also there are still some superb wet woodlands of willow and alder and a variety of fen habitat types. In all some 15 Priority Habitats are found which are included in the UK Biodiversity Action Plan and on the List of Habitats of Principal Importance in Wales.

These habitats are rich in wildlife with over 100 species of breeding bird recorded, 35 mammals, 30 butterflies, 20 dragonflies and damselflies, 350 species of lichen, 300 of mosses and liverworts, 30 ferns, 450 flowering plants, 40 hoverflies, 10 ladybirds and 15 different dung-beetles! Many are rare in Wales and within the UK and some are of international importance. In all 35 are on the UK and Wales Priority/Principal Lists including the golden plover (nearly all of the Welsh population are now found in the Cambrian Mountains), black grouse, otter, the climbing corydalis weevil and several rare fungi and upland lake water plants. The higher hills have merlin and dunlin breeding as well as a few hen harriers and ring ousel. There are still a few red squirrels and the polecat is a widespread species. Many other plants and animals found in the Cambrian Mountains are included on Red Data lists of threatened and endangered species.

The Cambrian Mountains were the last refuge of the red kite in the British Isles – down to just a single breeding female in the 1930s. It was the wildness of the area and a few local enthusiasts and farmers who saved it from extinction within our shores. Even thirty years ago you could travel all day in mid-Wales and not see a red kite but today following the widespread appreciation of this magnificent bird, and its struggle to survive the pressures of the 19th and 20th centuries, it is now thriving in Wales and has been reintroduced to several parts of England and Scotland with great success. The red kite was voted overwhelmingly as “Bird of the 20th Century” by members of the British Trust for Ornithology and the RSPB. Without the red kite’s survival in the Cambrian Mountains, it is likely that the reintroduction project might never have happened and boda wennol – the swallow-tailed hawk – would have been long forgotten.

The importance of the wildlife of the Cambrian Mountains is nationally recognised, with more than fifty Sites of Special Scientific Interest, and from an international perspective by the designation of six European Special Areas of Conservation, totalling over 13,400 hectares, and the Elenydd-Mallaen Special Protection Area, which extends to over 30,000 hectares.