The natural beauty of the plateaux, valleys and gorges of the Cambrian Mountains is equal to and often greater than that of some British national parks. Although politically distributed among three counties – Powys, Ceredigion & Carmarthenshire – the Cambrian Mountains are geographically one area, and form the main watershed of Wales. The rivers Severn, Wye, Elan, Irfon, Tywi, Cothi, Teifi, Ystwyth, Rheidol, and Twymyn all have their sources here.

The Cambrian Mountains are one of the few remote areas left in Southern Britain, have the least light pollution, and are one of the few places where one can escape from the sound of traffic. The A44 is the only main road crossing the area, much of which is inaccessible by vehicle, and thinly populated. 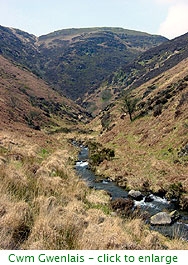 A different kind of natural beauty is to be found in the valleys, such as those of the Afon Gwesyn and Rhiwnant, with their numerous striking waterfalls, the equals of many “world famous” waterfalls in this country; Cwm Arban and the upper reaches of the Irfon and Tywi; and the serene tranquillity of the Doethie and Pysgotwr valleys – places where time stands still.

In the Cambrian Mountains, it is still possible to experience harmony with nature and the natural elements, and to find solitude and “escape” in our crowded country: “Quite simply, there is nothing in Wales to compare to the wilderness and sense of utter solitude that surrounds these vast empty moorlands.” (The High Summits of Wales. Graham Uney, Logaston Press 1999. ISBN: 1873827652).

It is the special quality of remoteness which characterises the area and makes it of national significance. It has a strong sense of openness, and those modern features which do occur, such as wind turbines on exposed summits, are intrusive elements in an otherwise unspoiled and rugged landscape.

Despite giving the impression of wildness, the Cambrian Mountains are a “living landscape”; their natural beauty is the result of interaction between natural forces and human activity. The landscape and its beauty are maintained by the local communities, landowners, farmers and estate managers who look after them. These people have helped mould the landscape for centuries, and this continues today.