Posted on 3 November, 2016 by Richard Wilson

The hospitality and excellent catering of the Metropole Hotel in Llandrindod Wells were once more extended by its owners – also longstanding CMS members – for the society’s Annual General Meeting on 29th October.

Chairman Roger Earis reported on another eventful year, and trustee Peter Foulkes filled in more detail on progress towards the society’s goal of gaining AONB status for the Cambrian Mountains, referring also to a recent proposal for the creation of something like a French “Parc Naturel” – a designation that doesn’t appear to come with much in the way of resources or landscape protection. Peter had also worked hard during the year on CMS responses to a number of consultations and issues.

The meeting was followed by a very entertaining talk by guest speaker Erywd Howells, on his life as a shepherd in the Cambrian Mountains. 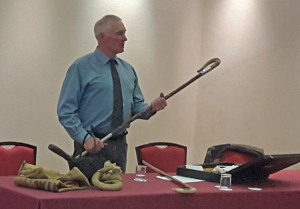 Erwyd’s talk covered many topics: history, community, ear-marks (sheep identification), branding and pitch-marking, the shepherd’s crook, and of course the weather. Though he lives close to Pumlumon and has spent years shepherding there, he confessed that the Elan Valley area is his shepherd’s paradise. Shining through all his words was his deep and passionate love for the Cambrian Mountains and its people, tinged with an inevitable sadness at the slow but relentless decline of the communities that gain their livelihood there.

This entry was posted in All posts, CMS at work. Bookmark the permalink.
By continuing to browse the site you are agreeing to our use of cookies